Intro­duction to fees to artists for exhibiting in public with examples indicating that sustaining such schemes is dependent on widespread and continued accep­tance of the principle and rigorous self-regulation within the sector, and on gaining suitable levels of public subsidy to the visual arts. Three financing options are considered in support of equanimity. An afterword considers whether in a political climate of reduced subsidy to the public sector, some new strategies are needed to finance the arts and artists’ contributions.

Read “Enforcement, equanimity and an afterword – thoughts on sustaining fair pay for artists” in full

This essay for the 2014 Seoul Art Space, Seoul Foundation for Arts and Culture Inter­na­tional Symposium briefly covers UK arts policies for support to artists’ devel­opment, comments on their impact on artists’ social and economic status and suggests a rethinking of the artists’ intrinsic role in society as a vital part of securing and sustaining contem­porary visual arts in the future.

Read “Rethinking artists: the role of artists in the 21st Century” in full

This paper combines arguments first presented by Susan Jones at an engage annual conference in which she questioned the efficacy of our insti­tu­tionally-driven visual arts ecology with new research and enquiry into future cultural, digital and social environ­ments for the arts. It calls for adoption of a more open, imagi­native, lateral, collab­o­rative and responsive approaches to creating cultural value, premised on building relation­ships and rapport with the different kinds and bandwidths of audiences and with the enablers and the makers of art. Links updated 17/05/2018

Read “​Creativity at the heart: the holistic approach” in full

This provo­cation commis­sioned by Stoke Airspace for an Artists’ Soup Kitchen addresses and confirms the impor­tance of the role and value of artists within cultural and social change. The four sections are designed to open up a discussion on ​‘what now?’ and – more impor­tantly – ​‘what next?’ for Airspace and artists and future artists located in Stoke.

Read “​Bite the hand that feeds you” in full

In reaction to government arts funding cuts, Leeds Metro­politan University in partnership with Culture Vulture and the Audience Agency, initiated a public debate at which a panel of industry experts debated what arts funding is for and who is most deserving of it. A short provo­cation by Susan Jones argued for more recog­nition and resources for artists and individuals to counteract the slow, ponder­ousness of insti­tu­tions whether for the arts or otherwise. View the whole event including the audience ​‘question time’ at the end using the link provided.

Read “A case for the arts” in full 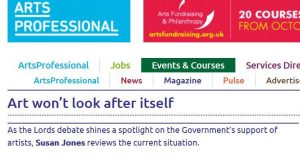 Art won’t look after itself

A debate insti­gated in the House of Lords that put a spotlight on the artists’ role acted as catalyst to discuss the impli­ca­tions for future support for artists through arts policy.

Read “​Art won’t look after itself” in full