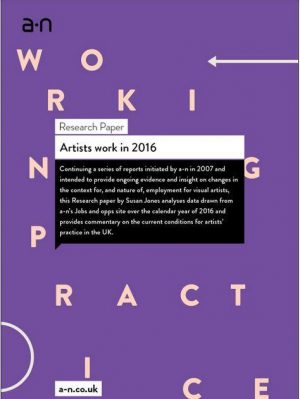 This Research paper commis­sioned by a‑n The Artists Infor­mation Company is part of a series which first began in 2007 as a means of providing on-going evidence and insight on the context for, and nature of, employment for visual artists. By refer­encing data from prior years, Artists work in 2016 identifies the impli­ca­tions of changes in the condi­tions for artists’ employment and liveli­hoods and proposes some areas for consid­er­ation by those charged with formu­lating policy and measuring the economic and social impact of the arts.

The Creative Indus­tries Feder­ation suggests 47% of workers are self-employed within the creative indus­tries, in which the visual arts is part. Research by a‑n has found that at least half of all visual artists are self-employed, and when those with self-employed and employed status in parallel are included, the figure rises to 81%. Thus within the creative indus­tries as a whole, visual artists are more likely to be those for whom ​‘looking for work’ is a constant and continuous activity and having immediate access to paid oppor­tu­nities is paramount to the pursuit of an artistic practice over time.

Prior creative indus­tries research concluded that the prevailing condi­tions are more conducive to workers under 35, and present inherent disad­van­tages for those from ethnic minority groups and for disabled people and women with or wishing to take on family respon­si­bil­ities. UK arts funding bodies however have a stated commitment to reducing social and economic disad­vantage and inequality across the publicly-funded arts.

The 2016 data reveals a substantial decline in the value of openly-offered work for artists since 2007, the UK’s the pre-recession year.

Comparison with 2013 shows that by 2016, the average value of a residency, award, compe­tition or commission oppor­tunity reduced and 28% of these made no financial contri­bution to artists’ livelihoods.

In terms of the sectors providing employment to artists, prior reports show that between 2009 and 2011 employer patterns remained fairly steady with the HE/FE sector the major employer. In 2012, arts organ­i­sa­tions and the HE/FE sector were neck-and-neck, and local authority employment in third place. By 2013, employment from arts organ­i­sa­tions had grown to 33% while that from local author­ities had declined to just 3%.

In 2016, the HE/FE sector with 42% of all paid work was the largest UK employer type, arts organ­i­sa­tions with 31% were in second place while employment from local author­ities had reduced further to 2%.

Consid­er­ation of 2016 findings within the under­lying condi­tions for the visual arts concludes that artists’ ability to sustain their practice and liveli­hoods is under­mined and the inherent disad­van­tages of the creative indus­tries are amplified when:

Artists work in 2016 was commis­sioned and is published by a‑n The Artists Infor­mation Company.

Read and download for free from the Research Index at a‑n.co.uk

McRobbie, A (2016), Be creative: making a living in the new culture indus­tries, Polity Press.